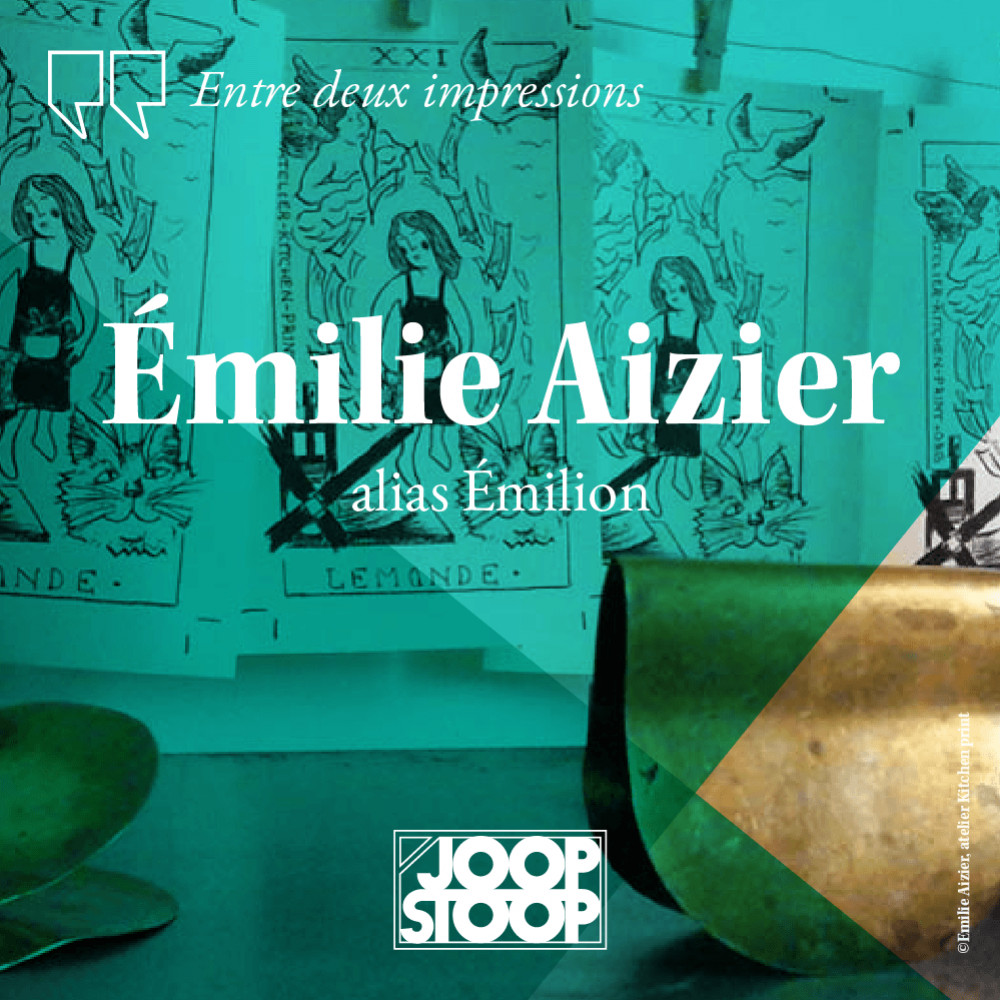 Discussion with Émilion - Émilie Aizier and the kitchen lithography

Who is Émilie Aizier ? Who is Emilion ?

Generally speaking, I am an artist, trainer & publisher specializing in the field of DIY art printing. Émilion is an artist's name with which I usually sign my prints. My artistic universe is often populated with stories, trees, forests and animals. Born in Les Vosges in Épinal, I did my artistic studies there at the art school. I then began a short tour of France of ten years and discovered many workshops of engraving, typography, serigraphy and lithography ... I wanted a less toxic engraving and lack of equipment and tools. workshop, I invented the Kitchen Lithography in June 2011.
Shortly after, I created my micro-business "Atelier Kitchen PRINT" for publishing manuals and training (at home and outside) in DIY art printing in 2013.
Eager to return to my roots, I returned to the city of images in 2017.
Atelier Kitchen Print is a self-business which was able to flourish and continues to exist thanks to the support of my relatives but also that of amateurs & enthusiasts by printmaking who finance part of my research by buying my publications.

What is lithography for you ?

Lithography in general is a planographic technique, a flat printing process which does not tolerate any relief of the matrix for the good reason that the inking is done using a rubber roller.
Basically, it was Aloys Senefelder who invented it around 1796.
We print thanks to the strong chemical repellency that exists between water and fatty substances. The roller is smeared with greasy ink, and the board (the die with the design) is permanently moistened with water. The areas of the design are dry and / or oily areas that will accommodate the ink from the roller.
Around the drawing, the area has been made hydrophilic thanks to the action of an acid (cola in Kitchen Litho for example). The water stagnating on the empty areas of the drawings, when the ink roller is passed over them, these areas remain white, the water rejecting the grease. On the other hand, the drawn areas which are oily (or dry, or even hydrophobic) are receptive to ink. Art and craft lithography is a faster printing technique than engraving but slower than fine art screen printing.
Each technique in my opinion can be used according to its projects, its destination ...

Can you tell us about the genesis of the kitchen litho technique ?
A second volume of your book "Kitchen Litho", why ?

Actually, the second volume is sort of the one that should have been the first one at the start because I started with rigid aluminum plates. But one Sunday, I found myself running out of plates.
So, I went to my laboratory, in other words: to my kitchen ... And I found a roll of aluminum foil! Very quickly, I realized that making Kitchen Litho out of aluminum foil bought in the supermarket was perhaps an easier way to start lithography. The first tests are often unsuccessful when you learn on your own and being able to redo a test quickly on a small piece of aluminum helps progress. And most importantly, I discovered new and impossible things to do with a rigid plate. The second volume arrived a few years later, once the tour was done with the aluminum sheets. I have found, how to go faster, cheaper and / or in a less toxic way. The circle was closed.

Are there any "kitchen lithographer" groups ?

There are workshops where we practice and exhibit the Kitchen litho like engraving and other techniques too, these are most of the time workshops of art schools and universities whose teachers introduce the technique to their students. students. There are some in Turkey, Croatia, Argentina etc.
Like engraving, the Kitchen Litho is made to create its own images and creation requires concentration and reflection, it is a rather solitary job in short. But it is also an arrow in addition to the bow of stampassin engravers equipped (or not) with an intaglio press.
The very principle of the Kitchen Litho is precisely its possibility of being practiced in a personal but also collective engraving workshop. I offer solutions allowing you to share the press without having to change the pressure when printing your Kitchen Litho for example. And then we can share the same intaglio ink, so the Kitchen Litho is very sociable!
The Kitchen is a technique that can easily be integrated into the engraving workshop.

Joop Stoop is a partner of your biennial. Can you tell us more ?

In order to showcase artists who go to the trouble of printing beautiful images in Kitchen litho and showcase their results, I created the contest at the time called "Kitchen Litho Contest" in 2015. It was created acts to show the public that this technique is intended for printing real art prints intended to be exhibited and not to amuse the gallery.
Because it's a serious game !
This competition initially reserved for the Kitchen Litho technique was opened to other art printing techniques in 2019 and turned into "Kitchen PRINT Biennale, the home-made print".
It aims to bring together and challenge Kitchen lithographers and more generally engravers from all over the world.
This Biennale is an unofficial collective and associative adventure.
The entry is made on file but everyone can propose their participation and no fees are requested.
We discover professional and amateur artists from different countries.
Open since 2019 to all art printing techniques, the Biennale also brings together members of the international jury and from the professional world of printmaking.
This edition, in which JoopStoop is a partner, brings together more than 80 prints, which is promising for the future of the Biennale.

Which ink from Joop Stoop do you recommend for this practice ?

Although I am DIY oriented and less toxic, I strongly recommend the use of traditional (professional) inks for their great printing qualities and retention over time. Without hesitation, the intaglio inks of the brand JoopStoop "JS" are perfect for the Kitchen Litho, but also of course for engraving.
There are superb colors like "Hot red" for example. Special lithographic inks are also ideal for Kitchen Litho in general. We sometimes work our ink with oil for engraving or we mix it with a bit of another more fluid or more viscous ink to rebalance it if necessary.